I’m just a tad frazzled at the moment, what with all that’s on my pre-holiday to-do list (and our girl comes home tomorrow! Hulō!), and for some crazy reason I scheduled three appointments today which have me driving all over Honolulu. So perhaps it’s best for all of us if I just re-post a Thanksgiving reflection.

Here’s something I did about a year ago, when I was engaged in remembering people from my past:

She came from American aristocracy: her maiden name was Adams, and her family had been in this country for who knows how many generations. And she came from money; her father was a banker in San Francisco who had hobnobbed with the robber barons.

So she was accustomed to a certain way, not to mention quality, of life. I got my first glimpse of this when I, recently engaged to her grandson, was invited to Thanksgiving in her home. At just the right time, after a time of cocktails and polite chitchat on the lanai, we were asked to make our way to the dining room for dinner. That the table was lavishly set you can imagine; each place setting had multiple pieces of china, crystal, and silver to contend with. And a finger bowl.

Now, I was — am — no country bumpkin. My mother had schooled me well enough in etiquette in my growing-up years (and believe it or not, I got further instruction in college, of all places) that I knew which fork was which and that my bread plate was on the left and so forth. I also knew not to pick up my spoon and start on the soup course before the hostess did. But it was my very first encounter with finger bowls.

For people to whom appearances matter, how one conducts oneself in these types of social situations makes all the difference. It was clear to me that this was a whole new ball game, and while I definitely did not have the home field advantage, for my fiance’s sake, I had to step up. So I did.

Nonchalance was my middle name, but you better believe I was carefully watching the rest of the group, taking my cues from them. The staff, two elderly Japanese ladies in starched white dresses and aprons, came in with each course and served us individually, always from the left (recently I saw this played out briefly in “The Help” — did you catch it? when a maid tries to serve one of the white ladies from her right side, and the lady, with a frown, makes her shift over to the left).

I might have been just a split-second behind the rest of the group that night, but I think I gave a pretty seamless performance. I got thrown off slightly during the dessert course when Misayo was attempting to serve me hard sauce and I thought it was ice cream. I’d never seen hard sauce before. And frankly, I can’t recommend it.

Anyway, when it came time to use the finger bowl, I peeked under my lashes and watched Baba, then daintily dipped my own fingertips in the warm, flower-scented water. No one would ever have guessed it was my first time.

I was there again many times over the years, of course, and always behaved utterly appropriately; I knew what was expected of me in that situation. She never said anything — that wouldn’t have been her way — but I knew I had her approval. And for my part, I knew, though would never have told her: I wasn’t about to be intimidated by a little finger bowl. 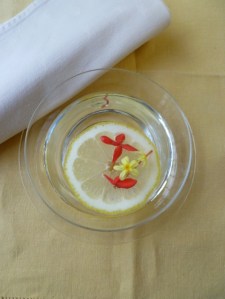 I am hosting the dinner again this year, and definitely busting out the good china and silver, but sadly, there won’t be any finger bowls.