1. Tonight The Coach and I are going out for dinner at a nice restaurant for Valentine’s Day. Yeah, we know it was yesterday; the flowers have already begun to wilt and the chocolates melt. But you know what? This way works for us. For one thing, yesterday was a school night. Kind of hard for teachers to go out for Date Night when they know they’ll be waking up, as usual, the next morning at 5:00. Plus, when you’ve been married 27 years, you have quite a few Valentine’s Days under your belt and so it’s okay to let them go by with just a card and a kiss on the actual day. Also, unless you started planning shortly after New Year’s, do you know how hard it is to get a reservation anywhere on February 14th? At our age and stage, let the kids have ’em; we’ll just settle for the next day, after the crowds subside.

2. But I’m going to ask our waiter how many proposals happened last night. Assuming young men are still into that sort of thing. I really have no idea, but from what I hear, it seems like men of what used to be known as marriageable age are either putting off the whole proposal/getting married thing or just forgoing it altogether. Which you can understand, given that they have, at that age, bigger fish to fry. Like getting a good job — or any job. In order to pay off their mountains of student loan debt. Then, when they’ve got all that more or less under control, you think they’re going to want to take it on all over again, with a big Say Yes to the Dress-type wedding? Not hardly.

3. Our boy falls into that “marriageable age” category, and is actually seeing someone who could potentially be a spouse, so I suppose I have a close-range view of that whole phenomenon. At 25, he’s in no hurry whatsoever to take that step; doesn’t feel ready for it all, and says so. By comparison, his grandfather, at age 25, had already been married for two years and had a baby. So there you go. Times change.

4. And anyway, I’m not ready to be a grandmother — although I could handle mother-in-law, I suppose — so this works out fine for all parties. Although it’s Kupuna [Grandparents] Day today for the kindergartners at The Coach’s school, and he’s having to fill in for a couple of the little ones’ absent grandparents. So I guess he’s getting some practice at it.

5. Speaking of our boy, it’s a good thing he does have a job with benefits, because he’s about to go in for minor surgery on his foot, next Tuesday. He seems pretty relaxed about the whole thing, which is quite a relief because his tendency is to be somewhat, shall we say, dramatic about anything involving needles in his personal space. I went with him the other day for his pre-op medical clearance appointment, and when the nurse suggested he get a flu shot as long as he was there, you’d have thought she’d just asked him to donate a kidney. Wimp.

6. One of my New Year’s Resolutions has to do with a better — maybe the word is regular — job with my housekeeping chores. It would be great, I thought, to hire someone to come every other week or so. But that’s not exactly in the budget, so then I had the brilliant idea of “hiring” myself to do it. I mark on my calendar the days the “cleaning lady” is supposed to be here, then I set aside those days to do all the things a real cleaning lady would do. If I had one, that is. So far this has worked exactly … once. I totally skipped it this week, but in my defense (I can’t believe I’m “defending” myself over this. So lame.), what with all the construction going on, what would be the point?

7. I’ve had it in mind to post more regularly about life in my Hawaii, as I did last October. Little ideas for topics pop into my head from time to time, but as you can see, I haven’t gotten around to it yet. (Is it just me or does this whole post seem like it has way too many run-on sentences with commas sprayed everywhere like so much, um, fertilizer? If so, sorry.) Anyway, one of my ideas came from a sort of field trip The Coach and I took to a farm last weekend. I took a bunch of pictures to show what a Hawaiian farm looks like, and how it differs from farms elsewhere. So in lieu — or in advance — of a whole post, here’s a couple shots of the crop, taro (kalo, in Hawaiian): 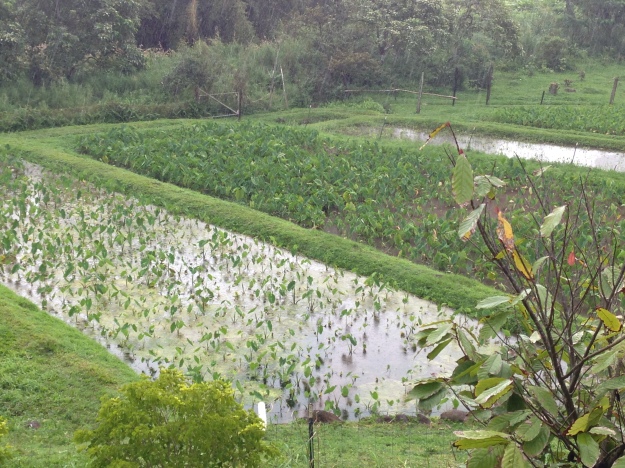 Taro is grown in muddy-water rice paddy type plots known as lo`i. The one on the left has been recently planted; the one on the right is more mature but not yet ready to harvest. And yes, it’s raining.

Here’s what a taro plant looks like up close. In the Hawaiian diet, the whole plant is used, from the root, which is where poi comes from, to the leaves.