Look, I understand that listening to someone who lives in a tropical paradise whine about her problems is not what you signed on for, but can I just have one more swing at it? Then, I promise, pau.

First whine: I’ve gotten accustomed to people (and when I say people, I’m including the quadruped member of the family) being healthy around here, fully functioning and at the top of their games. So when they’re not, it’s a bit of a challenge for yours truly.

Three weeks ago, it was our boy who suffered surgery on the sole of his foot. Originally there was thought to be an inclusion cyst there; turns out it was a rather large plantar wart. Upshot: doctor’s orders to be 100% non-weight bearing on the foot for a full three weeks. Crutches only, no walking, no driving even. Definitely no surfing, which is probably the biggest difficulty of all.

I was going to say this looks worse than it is, but the truth is, it’s exactly that bad.

So, it has fallen to me to do for him all that he cannot do for himself. I do however draw the line at  bathing; it’s been a couple decades since I’ve had that responsibility, and that’s exactly as it should be. I did go to the pharmacy and purchase a bath bench and a special plastic bag for covering his leg so that he could perform his own ablutions without compromising the dressing, so you can’t say I’m not doing my part.

But that still leaves making his breakfast (and washing the dishes), packing his lunch for work, then driving him to work and picking him up in the afternoon. Then making his dinner and washing those dishes (which I’d be doing anyway, so that sort of doesn’t count). It feels almost exactly the same as having a school-age child, which, as I recall: I DID THAT ALREADY.

And on top of all that, my four-legged baby also had to have surgery last week to remove a few cysts on his tummy and chest. Which means the poor guy has been relegated to the Cone of Shame. So I’ve been administering pain pills and antibiotics and wrestling him into the COS so that he won’t lick or chew the stitches. Bless his heart, he’s been awfully patient with me and the whole process; I think if I were in his shoes — paws? — there might be some inadvertent biting here and there.

Such a good boy

And finally there’s the fact that I may or may not be about to have a birthday in a couple weeks, to which I have to say: UGH.

I know, I know; as my dad used to say, any day above ground is better than the alternative. But can I just say, birthdays at this age and stage just serve to remind me that I get to deal with fun stuff like:

The good news is my birthday consistently falls during Spring Break, a week off for The Coach, so for the past twenty-plus years I’ve celebrated on a (mostly) annual ski trip to Colorado. Maybe it seems odd that an island girl would enjoy snow skiing in the Rockies, but I learned to ski — and got hooked — in college, and ever since it’s been the best vacation activity I can imagine.

The bad news is this year we are staying home. That has to do with the construction being approximately a month away from completion, and we have yet to make a decision about the wood for the bathroom cabinets, a ceiling fan, wall-mounted (or table?) lamps for the bedsides, a desk or desk design for the southwest corner, and a bookshelf configuration for the northwest corner. Plus the fact that a new bedroom and bathroom cost roughly ten times your average ski week. So, okay, I can live without a ski trip this time. However, I’m also missing our girl’s birthday. Hers is the day after mine, so we have always had a joint, two-day celebration.

But for the first time in 22 years, we won’t be together on our birthdays. Which I’m trying my hardest not to dwell on, because it just makes me more blue. Recently when our girl and I have had a chance to talk — which hasn’t been often, given my various commitments [see above] and hers (being a junior in college; nuff said) — she has asked me what I’d like for my birthday.

Oh, Sis, where do I start? I just want to hang out with you, go get pedicures, tell funny stories about the night you were born, eat cake and pretend all the other nonsense [see above] isn’t happening.

That would be a great birthday present, but I suppose I can live with its deferral. Time moves on, after all. Stitches will be removed, crutches and Cones of Shame eighty-sixed, and building projects completed. It’s even possible I’ll come up with a solution to the pesky seven pounds.

So, there’s nothing left to do but wind down the whine. Thanks for letting me get it off my chest.

Now back to our regularly scheduled P in P programming. Look! Sunrise over Koko Head: 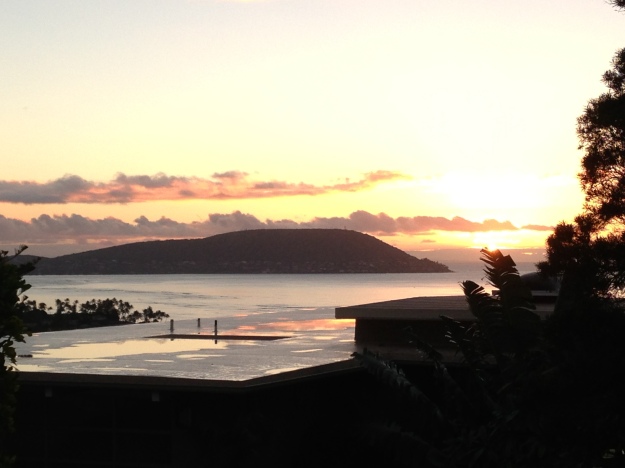 There are some days — not many, but some — when I would really like to strangle my dog. Today, you may be guessing, is one of them.

Here’s the thing: I am an unabashed dog lover. I think dogs are just the best pets ever. When it comes to dogs, I’ve got it as bad as anyone; just love ’em. But I have to say, I really prefer big dogs. I don’t seem to have as much affection for little dogs. I don’t know why that is. But the bigger the dog, the more I’m going to love it, and the smaller the dog, the more I’m … not.

However I think my next dog, much as it pains me to say, is going to have to be a small dog. Because the big one I’ve got has almost gotten to be too much for me to manage. I probably won’t end up killing my dog, as crazy as he has driven me, but there’s a chance he might kill me first.

As he almost did — again — this morning on our walk.  Do you ever watch the Dog Whisperer? And you know how his mantra is that dogs need exercise, discipline and affection — in that order? That makes pretty good sense, so I’m fairly faithful about walking my dog every day, because I figure a brisk half-hour walk is probably as good for me as it is for him.

The problem is, when we set out each morning, I have to remember that I’m walking Jekyll and Hyde. Which you’d never guess just by looking at him. I mean, look at this: 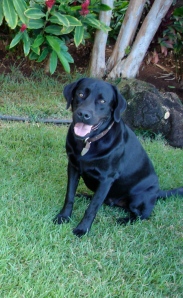 Sweet, huh? How about this:

What an angel. Most of the time he is, honest. But he has a dark side. (And I’m not just talking about the outside.) He has a problem with other dogs, which is that he really, really loathes them, and will go to any lengths to let them know what an affront they are to his very existence. And there will certainly be biting involved.

And when that happens, and I’m on the other end of the leash, I’m usually the one who ends up getting the worst of it. To wit:

This is the result of him taking off after the *evil* sheepdog who had the audacity to be walking down the same street as us, thus dragging me along the asphalt. Which makes this the fourth or fifth time I’ve come home bleeding (with a ruined manicure to boot) from what ought to be a nice bit of morning exercise, with a 75-pound Labrador Retriever who is apparently possessed by demons.

So I turned the air just a tad blue — sorry, neighbors — as I picked myself up off the pavement and tried to stanch the bleeding as best I could, and did my best to remember that he really is a good dog. Most of the time. When he doesn’t require the services of an exorcist.